For David Senk, entrepreneurship is more than just a vocation – it’s in his blood.

“My grandma ran an ice cream shop, a pet grooming service, and opened one of the first used book stores in Miami,” David explained. “My mom sold organic vegetables that she grew in her garden and my Aunt Ida had a knitting store in Harlem back in the 60s’.”

However, David’s desire to follow his family members’ example while expressing himself through the arts would serve as a source of internal conflict as he entered adulthood.

David’s early career experiences in New York City and the San Francisco Bay Area seemed to confirm these warnings – he routinely worked with artists who were working long hours with few benefits and were struggling to make ends meet. This lack of community and economic support for the arts and creatives prompted David to begin the first steps towards starting his own business.

While David already had a great idea, decades of experience, 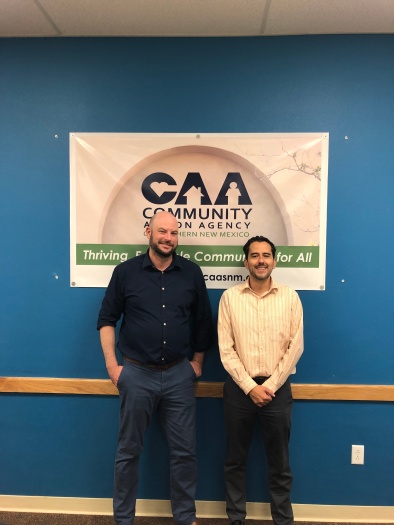 and an underserved niche, he still needed help creating a business plan and a strategic plan. That’s where Community Action Agency (CAASNM) and its Family Empowerment service group came in.

“I would definitely say that the workshops were a catalyst for me,” David said. “Rodolfo has a very unique skillset that he brings to the organization; he is able to listen to the ideas of a customer and help make them concrete.”

It was during the midst of a workshop that David created his business model and came up with a name for his new endeavor – Creative Networks, LLC. Creative Networks is a consulting business for arts and culture presenters, creative start-ups, and social ventures founded on three ideological pillars: activating social networks, engaging audiences, and building community. David focuses on branding and events, providing logistical support to creatives, and connecting them with venues and other community resources.

“It’s about building a support system that isn’t there,” David explained. “For example, if you’re an artist with a kid but no childcare, you need a work space that takes that into account before you can move forward.”

Ultimately, David views the creative sector as an underutilized economic engine – funding the arts and supporting creatives enriches the local economy, promoting sustainability and the development of start-up businesses. David views nonprofit agencies like CAASNM as integral to this process, as they allow artists and other entrepreneurs to access services and establish partnerships at low cost or no cost.

“I think that nonprofits are the backbone of start-up culture because their interests go beyond making money,” David said. “I’d like to be part of keeping that culture alive.”

Your Support Is Critical!